Uveitis is the inflammation of the uvea, the pigmented layer that lies between the inner retina and the outer fibrous layer composed of the sclera and cornea. The uvea consists of the middle layer of pigmented vascular structures of the eye and includes the iris, ciliary body, and choroid. Uveitis is an ophthalmic emergency and requires a thorough examination by an optometrist or ophthalmologist and urgent treatment to control the inflammation. It is often associated with other ocular problems. 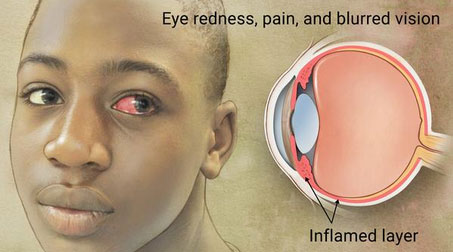 Uveitis is classified anatomically into anterior, intermediate, posterior, and panuveitic forms—based on the part of the eye primarily affected.

There are a variety of tests that need to be performed to diagnose uveitis and determine which treatment should be prescribed. To treat uveitis, your eye doctor may prescribe a steroid to reduce the inflammation in your eye. Whether the steroid is in eye drop, pill or injection form depends on the type of uveitis you have. Because most cases of uveitis affect the front of the eye, it’s most commonly treated with eye drops. Annual comprehensive eye exams are essential to good eye health in the early detection of many eye diseases.

Dr. Weikum is in Tuesday & Thursday